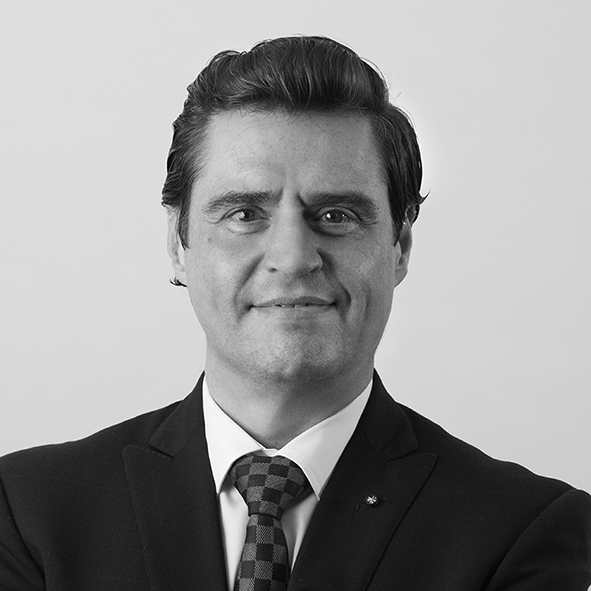 Has been professionally practicing for more than 25 years in Intellectual and Industrial Property in matters concerning trademarks, patents, trade secrets, e-commerce, copyright, unfair competition, franchising, domain names and litigation in these areas.

He has been licensed to practice as a lawyer throughout the Mexican Republic since 1994. He holds a Law Degree from Anahuac University in Mexico City under the thesis entitled "The Trade Name in the Mexican Law." He is as well, arbitrator in the regulated arbitration proceeding by the Federal Copyright Law granted by The National Institute of Copyright (INDAUTOR) 2019.

He has attended specialized courses in Mexico as well as in the United States of America, including those of Comparative Law at Harvard University and International Business at the Escuela Libre de Derecho. He also received his master’s degree in Intellectual Property at the prestigious Law School of Franklin Pierce in Concord, New Hampshire in 1995.

He is a former President of the National Association of Corporate Lawyers, Bar Association (ANADE). In 2016, he was awarded the “Client Choice Awards” for Intellectual Property by Lexology Magazine. Furthermore, in 2016 he contributed to the Industrial Property Law Reform in connection the opposition system in Mexico.

At the end of 2018 he made his debut as conductor of the "Perspectiva" program broadcast by the Judicial Channel, where every week the program looks at a different Law Theme.

Jose Juan is President of the Mexican Association of Lawyers of Intelectual Property (AMPPI) for the biennium 2021-2022.

Send me a message